Ross Marquand returns to Roanoke! Marquand is an American impressionist, actor and producer. He has played Aaron on the television series The Walking Dead since 2015, and Red Skull in the films Avengers: Infinity War (2018) and Avengers: Endgame (2019). He is also known for voicing numerous characters including The Immortal and Rudy Connors on the streaming television series Invincible!

Ross will be available for autographs and photos August 7th and 8th at Big Lick Comic Con in Roanoke, VA!

Tickets and photo ops are now on sale at www.biglickcomiccon.com. 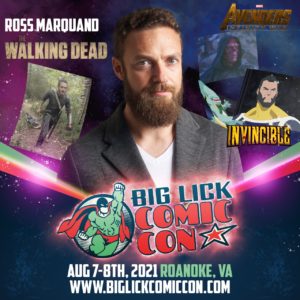