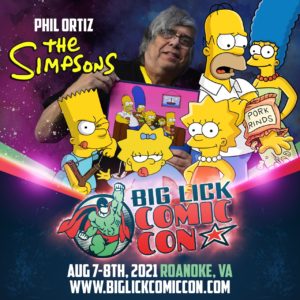 Over his more than 30 years as a professional artist, Ortiz has worked on everything from daily newspaper comics like Bugs Bunny to layouts and character design for animated cartoons including The Simpsons where he had a hand in the look of about 200 characters including favorites such as Flanders, Otto, Herman, Lou and Eddie, Ralph, and Apu.
Ortiz has won five certificates of achievement for his work in TV animation and has been drawing for The Simpsons comic books for many years. He won three of these Awards for work on Jim Henson’s Muppet Babies animated series. He has also worked on Disney’s illustrated books and for Hanna-Barbera, Warner Bros. Animation, Ruby Spears, and many other animation studios in his long career.

Mr. Ortiz is known for his “Simpsonize” sketches he will do for patrons at his table! Be sure to visit him for a one of a kind piece with YOU as a member of the Simpsons!