Skip to content
| No Comments
Ty Templeton has worked in the comics industry for 35 years as a publisher, editor, colorist, and letterer. Ty also teaches others how to make their own comics, through his Comic Book Bootcamp. He's worked on The Batman Adventures, Superman, Spider-Man, Mad Magazine, The Simpsons, The National Lampoon, the Avengers, and so many others.
Just announced - DC Comics is launching a new six-issue miniseries called Batman: The Adventures Continue in April. Set in the world of the beloved show, the digital-first series is written by the show’s producers Paul Dini and Alan Burnett and illustrated by Ty Templeton.
We cannot wait to welcome Ty to Roanoke! 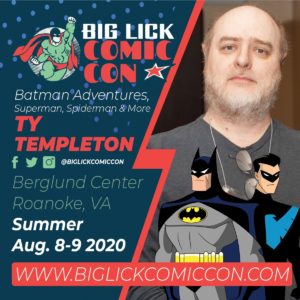